Several years ago, in digging up a Portsmouth, New Hampshire street for a public works project, workers uncovered human remains. The location was identified as a slave burying ground from the 1700s. Work halted and what followed was an effort to remember, honor, and to re-bury those whose final resting spot had been disturbed. To learn more, visit the African Burying Ground Memorial Park website. The brass and granite memorial at the park was designed by artist Jerome Meadows from Savannah, Georgia. 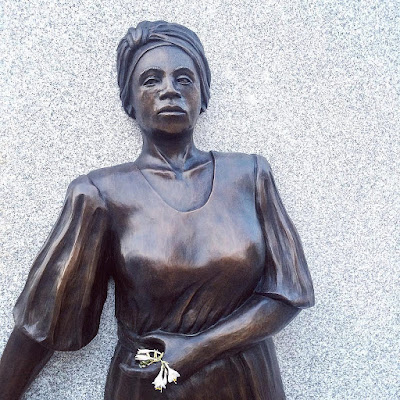 On October 23, a special poetry/dance/shadow play performance took place in a small theater in Portsmouth. This multi-disciplinary effort was the brain-child of Mr. Meadows, who also produced similar performances in Savannah as part of the "Blank Page Poetry" series. Portmouth's performance was titled, "Words & Shadows: Truths that Arise Remembered."

The poetry was solicited by the Portsmouth Poet Laureate, Kate Leigh. Local poets were instructed that if their poems were selected, they would be expected to participate in the performance by reciting their work and incorporating some choreographed movements. The selected poems included one by a six-year-old first grader, who, as the program informed us, "wrote his poem one morning at the African Burying Ground."

The video below begins with the shorter performance that took place outdoors at the African Burying Ground Memorial Park the day before the theater production. The street noise is very distracting, so please skip ahead to 3:20 for the theater performance. To see the young poet, go to 31:40. It's not the best recording, but it will give you an idea of what was involved in this tribute to the slaves from the "Live free or die" state of New Hampshire.

I did not submit a poem for the "Blank Page Poetry" project, but I did write one.

Here beneath
The pavement
The soil
The remnants of shroud
And coffin
We did our work.

We consumed your flesh, your bones.
We reduced you to nutrient form
So that you would live on.

Not as free man or slave.
Not as white or black.
Not as rich or poor.
Not as theist or atheist.
Not as man or woman.
Not as old or young.

Not as anything but energy.
Heat.
Light.
Power.

Visit Katya at Write. Sketch. Repeat. for today's Round-Up of poetry links.
Posted by Diane Mayr at 12:00 AM