When Matt Forrest issued a second "Poetry...Cubed!" challenge I seriously considered writing a poem with all three of the photographed items included. However, the poem took over after I started with bittersweet and it wouldn't allow me to add in a woodstove and a New England Patriot.

The whole thing morphed into a pre-Thanksgiving harangue! Funny how that happens. 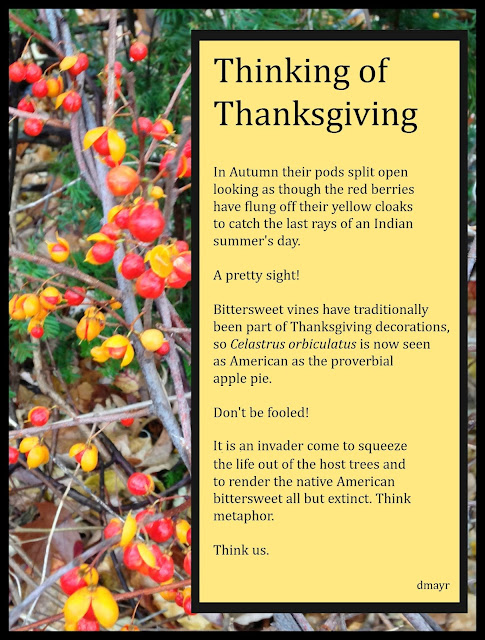 This postcard, though not given a date, was identified as being from the Whitney Valentine Company of Worcester, MA. It is probably from the early 1900s and seems to indicate that bittersweet was already a well-known symbol at the time of its printing. [For those interested in postcards, here's a post I found on Mr. Whitney.] 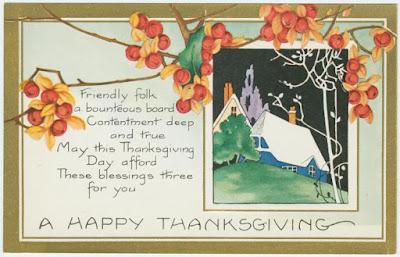 Few people realize that the variety that is seen almost everywhere here in the northeast, is Oriental bittersweet and is extremely invasive. People clip stems of the berries to use in their homes and on their front doors and inadvertently assist in its spread. Here's a photo I took, which demonstrates the stranglehold the vines can have once they become established. The host tree, year by year, is squeezed to death. 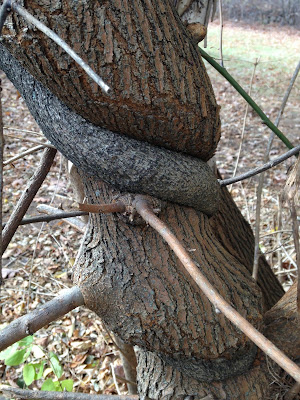 The python of the botanic world!

Matt Forrest, you've forced me to write an American tale of horror!

This pre-Thanksgiving Poetry Friday the Round-Up will be held at The Miss Rumphius Effect. Have a great Thanksgiving Day!