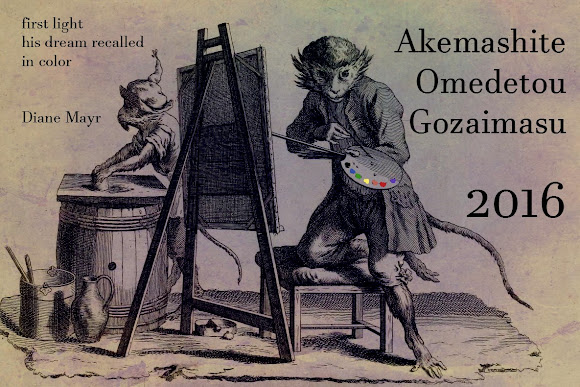 It's the first of the year which means it's time for the Nengajo--New Year's haiku postcard exchange. (To learn more about the Nengajo, click on the label on the right hand side of the page.) We're entering the Year of the Monkey. The Monkey, as Wikipedia states,

...possesses such character traits as curiosity, mischievousness, and cleverness. Forever playful, Monkeys are the masters of practical jokes. Even though their intentions are always good, this desire to be a prankster has a tendency to create ill will and hurt feelings.

Although they are inherently intellectual and creative, Monkeys at times have trouble exhibiting these qualities. When that happens, they appear to others to be confused. But nothing could be further from the truth as Monkeys thrive on being challenged. Monkeys prefer urban life to rural, and their favorite pastime is people-watching.

It took me a long time before starting on this year's postcard because I had no idea what I would write for a haiku. I had no direct experience with monkeys to draw from. However, the minute I found the illustration of the painter monkey I knew I had found my inspiration. The illustration is from a French picture book published in 1740 by Christophe Huet, Singeries, ou differentes actions de la vie humaine representées par des singes. Translation: Antics, or various human activities represented by monkeys. 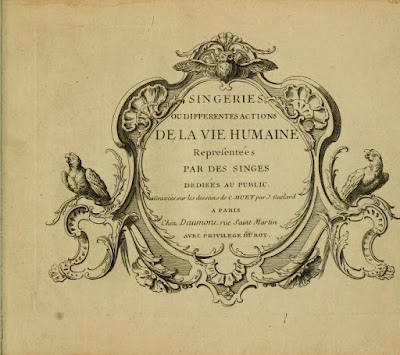 I manipulated the illustration by adding a hint of color in the background and bright colors to the palette. (Have you seen the film Mr. Turner? This illustration reminds me of it. Turner painted and his father mixed colors for him. It was an interesting film--how's that for a wishy-washy assessment?)

The word "first" is symbolic of the new year. These symbolic words that stand in for a season are known as kigo. I imagined this little artist up at the crack of dawn on New Year's Day ready to paint his dreams for the coming year.

Participation in the Nengajo has fallen off in the past few years. This year only 16 signed up. In past years there have been dozens. So, if you would like one of my postcards, I'd be happy to send you one while supplies last. Email your name and address to me.

Mary Lee, keeper of the master Poetry Friday Round-Up schedule, is hosting the first Round-Up of 2016 at A Year of Reading!

I wish you peace, happiness, and a year of creativity!
Posted by Diane Mayr at 7:00 AM