This year a number of people on Facebook shared a a Columbus cartoon from The Oatmeal. I urge you to take a look at it and read it, including the notes at the end. It explains a connection to American history that most of us probably haven't heard--Columbus's role in the slave trade. It is not a pretty picture.

I'll never think of Columbus Day in the same way. The artist who put together the Columbus Day cartoon offers up some alternative titles for the October federal holiday. I'd like to offer this one, "Truth and Justice Day."

It's a long introduction to today's senryu (a poem like a haiku, but about human nature rather than Nature): 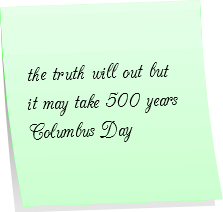 Recently I've been reading two new adult books of fiction that take a look at slavery. They are The Underground Railroad by Colson Whitehead and Homegoing by Yaa Gyasi. Of the two, Homegoing had a greater impact on me. I highly recommend it for book group discussions. Although The Underground Railroad is an "Oprah book," and on the list of finalists for National Book Awards, I can't recommend it with the same level of enthusiasm, but, it, too, will make for a great discussion.
Posted by Diane Mayr at 6:00 AM