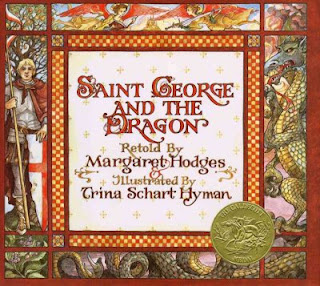 The feast of Saint George is celebrated on April 23, this coming Sunday. (April 23, 303 is the reported date of his death.) Saint George, is the patron saint of England, Portugal, Romania, and several other countries, and the story of his slaying the dragon has been told and retold over the centuries. Saint George and the Dragon: A Golden Legend adapted by Margaret Hodges from Edmund Spenser's Faerie Queene and illustrated by Trina Schart Hyman, is a modern children's classic. It was awarded the Caldecott Medal in 1985.

My poem for today references the sainted man, but is not directly related to his story. It was really written as a woodcut project poem.

So as not to distract you by the vocabulary, let me explain that borborymus is a stomach/intestinal noise (plural = borborygmi). A great word, isn't it? (I believe I originally was introduced to it by Janet B.) 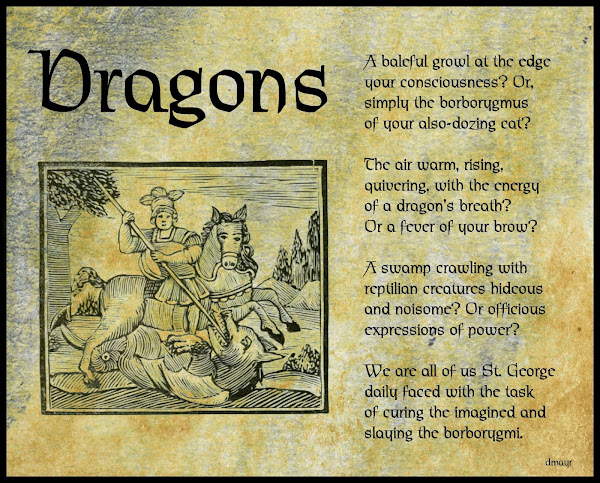 A baleful growl at the edge
your consciousness? Or,
simply the borborygmus
of your also-dozing cat?

The air warm, rising,
quivering, with the energy
of a dragon's breath?
Or a fever of your brow?

A swamp crawling with
reptilian creatures hideous
and noisome? Or officious
expressions of power?

We are all of us St. George
daily faced with the task
of curing the imagined and
slaying the borborygmi.

Learn more about Saint George in this book published 110 years ago; click here.

I wrote another Saint George poem two years ago, see it here.

The lovely Tabatha is hosting the Round-Up at The Opposite of Indifference.
Posted by Diane Mayr at 9:00 PM