Two weeks ago I attended the Mass Poetry Festival in Salem, Massachusetts. It's my 7th year attending, if my memory serves well. I make a weekend of it and stay overnight in a B & B even though Salem is less than an hour's drive from home. I really took the opportunity that the rain gave me, to relax and to not be obsessive about packing in as many sessions as possible. Today's post will only hit on a few of the events and activities that I did manage to take in.

The first session I went to had the amusing title, "Doughnuts and Death: A Baker's Dozen of Emily Dickinson's Most Depressing Poems." Actually it was a giant Emily Dickinson gossip session with most of the discussion going to Dickinson's love of Judge Otis Phillips Lord (who was a friend of her father's and two decades older than she).

We were told that the Judge playfully called Emily, "Jumbo." Here's a picture of Judge Lord (it is an engraving from History of Essex County, Massachusetts and obviously is based the photo you can see here. 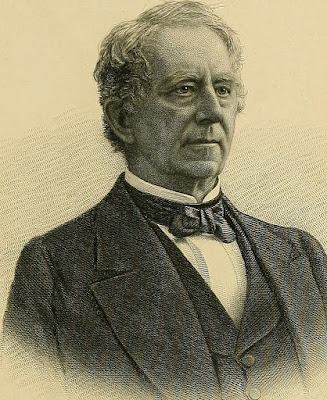 As for her "most depressing poems," it seems that between the ages of 10 and 25, Emily lived next to a graveyard! No wonder death was addressed in her poetry!

And, speaking of doughnuts, here, Emily has written the recipe for "Kate's Doughnuts."

I definitely have some reading to do on Miss Emily's life!

At a reading by Andrea Cohen and Tom Sleigh I found it fascinating that Tom Sleigh's parents ran a drive-in movie theater. He told us some of what it was like growing up at the drive-in! At times I'm more interested in the poet than the poetry.

I do enjoy humor, and at poetry readings things can get a little angsty, so I made it a point to attend, "Not Without Laughter," a reading from the anthology by the Black Ladies Brunch Collective. The printed program had this to say about the anthology: the work "centered around finding joy, even in the most painful of times." I loved hearing how the women wrote poems in response to each other's poems, too.

Another reading I attended was given by Kazim Ali and Rigoberto Gonzalez. Ali mentioned that he took all his poems and made a text cloud of the most-used words. He next took the text cloud words and put them together to make a new poem. Fascinating!

Each year at the festival there is "The State of Poetry" session held. Here are some tidbits from this year's discussion:

Kazim Ali stressed that his poetry is not political, because "it is my life."

Marie Gauthier said that contemporary poetry is the same as the state of the world, "in complete disarray."

Rigoberto Gonzalez reads poets who went through difficult times to see how they got through. And he thinks that poetry lasts because of the craft.

Elizabeth Powell stated that "we are commodifying each other." And this: "poetry is the Snapchat of literature."

I learned about the Rabbit Heart Poetry Film Festival, which is, "a celebration of the meeting of poetry and the visual arts at the intersection of film--poetry movies!" We viewed many of the short films of the past three years. Interestingly, a poet is not allowed to be filmed doing a "reading" of his/her poem. The films are more like illustrated poems. Here's one:

Make your way over to Whispers from the Ridge where the Poetry Friday Round-Up is being hosted. See you next week when I'll wrap up my Mass Poetry Festival review.