I was skimming through a listing of poems on The Poetry Foundation's website and came upon "Arguing with Something Plato Said" by Jack Collom. It stopped me short since I had mistakenly read it as "Arguing with Something Potato Salad"! [Click here for Collom's poem. I found it unreadable. That's just me, I have a short attention span. I prefer short and to the point, which Collom's poem is not. Perhaps you will love it?]

In any case, I decided I liked "my" title better and figured I'd better write a poem (short and to the point) to go with it. Not my easiest challenge, but potato salad brought to mind an invitation to a Cinco de Mayo party that I received many years ago--before Cinco de Mayo became another excuse for Americans to drink to excess. Here's a cherita sequence with a slightly altered title. (A cherita is a three-stanza poem that tells a story. The first stanza, one line, sets the scene. The second stanza has two lines, the third has three.) 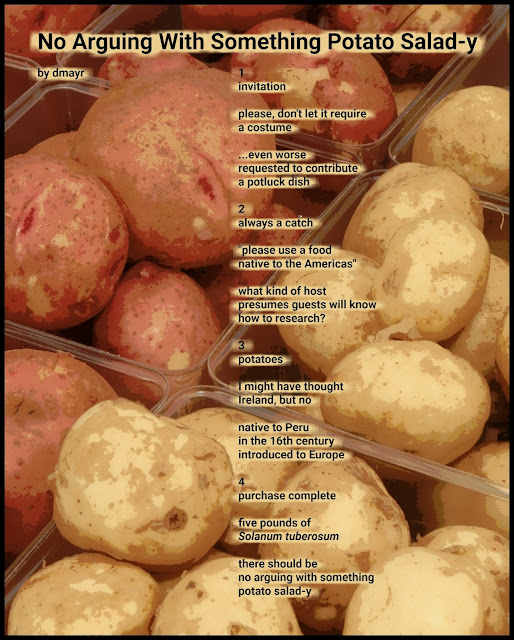 No Arguing With Something Potato Salad-y

...even worse
a request to contribute
a potluck dish

"please use a food native
to the Americas"

what kind of host
presumes guests will know
how to research?

native to Peru
in the 16th century
introduced to Europe

there should be
no arguing with something
potato salad-y


The unusual party invitation did indeed request a dish made with a native ingredient. I made a potato salad, but I also added beans and corn--two other native foods. I should have argued with myself about something potato salad-y! It wasn't great, rather bland. If only I had added some heat, but that was a time before I became a fan of hot seasonings.