I was a participant in Laura Shovan's "6th Annual February Daily Poetry Project" and wrote a poem on each of the 28 days of February (and the last seven days of January). I've been illustrating some that are not dependent on the original work of art that acted as a prompt. I may be sharing one or two more on future Poetry Fridays.

This is a persona poem, which is defined by The Poetry Archive's glossary, "A persona, from the Latin for mask, is a character taken on by a poet to speak in a first-person poem." 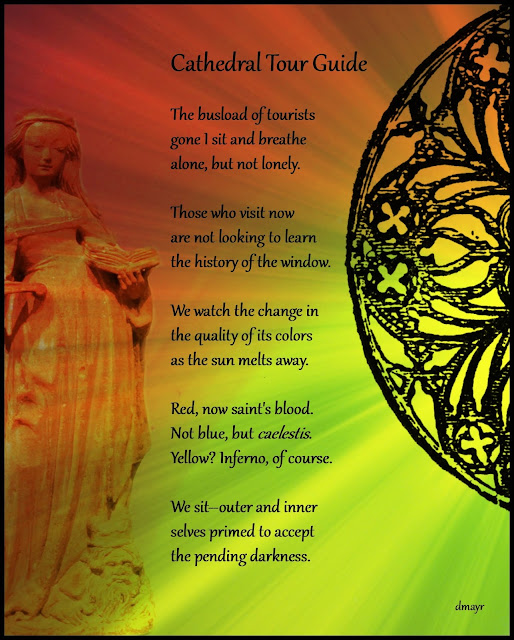 The busload of tourists
gone I sit and breathe
alone, but not lonely.

Those who visit now
are not looking to learn
the history of the window.

We watch the change in
the quality of its colors
as the sun melts away.

We sit--outer and inner
selves primed to accept
the pending darkness.

Note: caelestis is the Latin root of the word, celestial.


The guide is a product of my imagination and the cathedral is not a particular one. I did think of the "window" as a circular rose window. In reading about windows, I found that a rose window is also known as a "Catherine window," after the 4th century martyr, St. Catherine of Alexandria. (I added a statue of St. Catherine to the illustration.)

This led to a look into Catherine. Here's a quick summary of her story: originally a pagan, at age 14, Catherine had a vision of the Madonna and Child and became an ardent Christian. She had a run-in with emperor Maxentius, a pagan, who tried a number of ways to "persuade" her to renounce her faith. He used torture, starvation, and when that failed, he proposed marriage! Not surprisingly, she refused. He didn't like her response and ordered her executed on a breaking wheel. A breaking wheel was used to crush the bones of the person being executed. Contrary to what it was supposed to do to Catherine, the wheel itself was broken. (The breaking wheel became known as a "Catherine wheel.") Catherine was finally executed by beheading, she was 18. Believe me, her story is much more complex and mystical then my retelling!

Renée at No Water River will be posting this week's Round-Up, please stop by!
Posted by Diane Mayr at 9:00 PM