Over the course of the six weeks of the 6th Annual February Daily Poetry Project (it includes the warm-up of the week before and the cool-down of the week after February), I found myself writing in a variety of forms--from haiku to cherita to limericks to a form new to me, the "Skinny." I also wrote three haibun. A haibun is a prose piece combined with haiku. Here are two, the third, "The Stuff(ing) of Angelic Bears," can be found on Donna Smith's blog from last week. 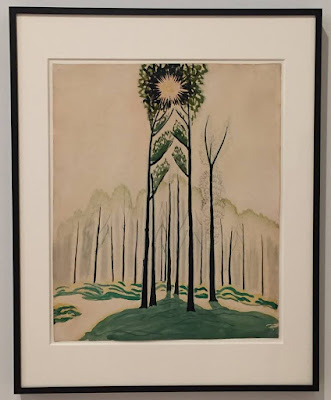 "The Tall White Sun" (1917) by Charles Burchfield. Photo taken by Tricia Stohr-Hunt at The Whitney Museum of American Art.

In the 1500s the British explored the seas by way of multi-masted sailing ships built with native pines.  The forests of the British Isles were stripped, and only centuries' time could replenish shipbuilders' supplies.  Exploration led to exploitation of the natural resources of other lands.  And thus, the colonies of New Hampshire and Maine, with their massive old growth Eastern White Pines, were destined to suffer economic, political, and ecological consequences.  The King's men came to the region to mark trees, selected for British masts, with three hatchet cuts known as the "King's Broad Arrow."  The citizens of New England had to work around the King's Pines, and, be subject to fines and punishment if they harvested any of them.  In 1734 a group of New Hampshire citizens fought back in what was, at the time, called, "The Mast Tree Riot." 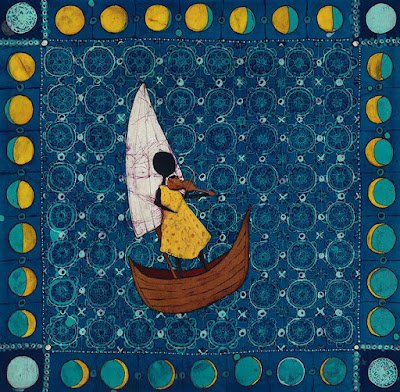 On a Full Moon Night

It was after the war and their families never prospered during those postwar boom years.  They were the poorest of river rats amongst the small city's river rats--the best friends, though, that a boy could have.

On warm, full moon nights, two or three of them would head down to the bay carrying a bushel basket between them.  A home-made-net-on-a-broomstick sat on each one's shoulder.  They waded into the shallows where hard-shell crabs scurried through the eel grass.  They believed the full moon had powers to draw the creatures to the surface.  But, in truth, the light from the moon simply made their mossy-green, flattened bodies more visible.

The boys would scoop crabs from the water and toss them into the basket.  They were divided equally at the end of the night.  At home his mother waited with a pot of boiling water at the ready.

On a handful of nights each year he would eat like a king.

That was long ago, and far away...

Sometimes, though, on full moon nights he'll take the big boat's dinghy and drift through the shallows.

If you're looking for the Poetry Friday Round-Up, you'll find Linda's hosting at Teacher Dance.

Email ThisBlogThis!Share to TwitterShare to FacebookShare to Pinterest
Labels: haibun