Poetry Friday--I Am From Project

Several Poetry Friday bloggers have mentioned the "I Am From Project" in posts over the past few months. Read the origin of the project here, and find George Ella Lyon's inspirational poem, "Where I'm From<" here.

My recent contribution to the Project is an illustrated cherita.

It is only a single aspect of where I'm from, but, it's an important one--my immigrant roots. I may have taken some liberty with the neighborhood, since I don't know for certain that any of my Polish grandparents lived in tenements, but, the laundry-hung-across-alleys memories are real! 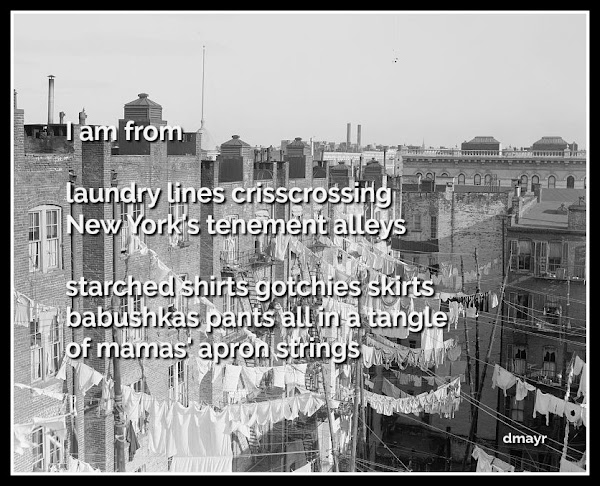 
A bit of explanation: gotchies are underpants. When I was a child, in my grandmother's home, we called them "gitchie-gotchies." A babushka is a head scarf that ties under the chin. 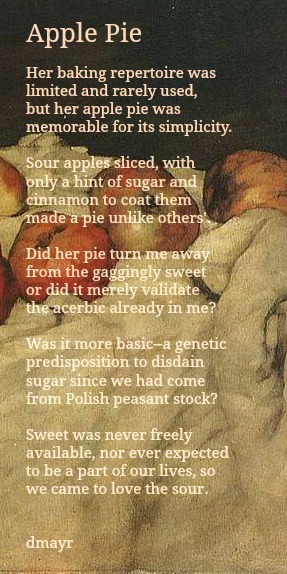 © Diane Mayr, all rights reserved. "Apples and Pears" by Carl Eduard Schuch courtesy The Athenaeum, cropped to fit the poem.

Her baking repertoire was
limited and rarely used,
but her apple pie was
memorable for its simplicity.

Sour apples sliced, with
only a hint of sugar and
cinnamon to coat them
made a pie unlike others'.

Did her pie turn me away
from the gaggingly sweet
or did it merely validate
the acerbic already in me?

Was it more basic--a genetic
predisposition to disdain
sugar since we had come
from Polish peasant stock?

Sweet was never freely
available, nor ever expected
to be a part of our lives, so
we came to love the sour.

I hope you all will take part in the I Am From Project, and I look forward to seeing your contributions!

Amy is hosting the Round-Up at The Poem Farm where she has a bumper crop of poetry waiting to be picked!
Posted by Diane Mayr at 12:00 AM