Earlier this week Poetry Friday regular, Irene Latham, published a new book titled Love, Agnes: Postcards from an Octopus. On her blog, Irene declared October to be Octopus month and she solicited octopus poems and art from her readers. I sent Irene an illustrated cherita, which may make an appearance at Live Your Poem sometime soon.

I found that writing an octopus poem was fun, so I wrote two more!

Last Friday, Margaret at Reflections on the Teche celebrated the publication of Irene's new book by having her students write octopus poems. One student, Madison, even created a new form, the Octaiku. Madison explains:

I tried my hand at an Octaiku and here is the result: 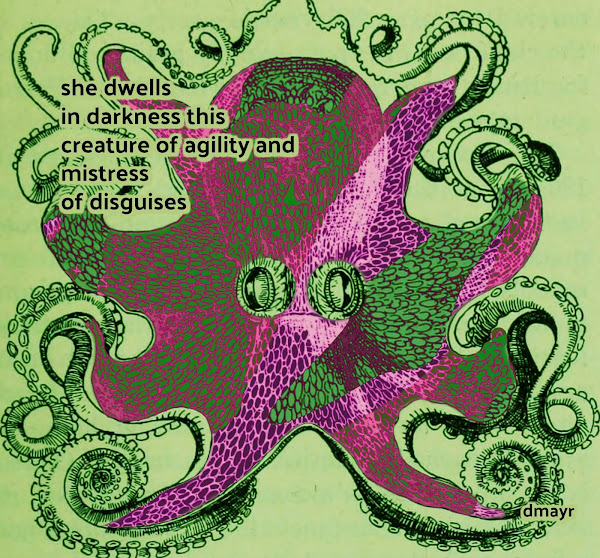 I took the liberty of disguising my octopus in rather funky camouflage! 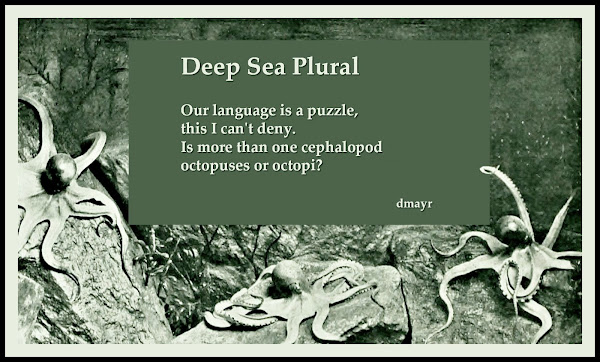 Our language is a puzzle,
this I can't deny.
Is more than one cephalopod
octopuses or octopi?

I'm a big fan of a book by Sy Montgomery, The Soul of an Octopus: A Surprising Exploration into the Wonder of Consciousness. In it, she tells us the plural of octopus is octopuses, and that's good enough for me. My online Merriam-Webster, though, lists octopuses as well as octopi AND octopodes.

Head over to The Opposite of Indifference where Tabatha is holding the Round-Up today.