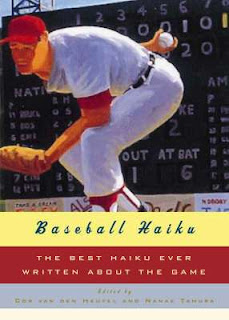 Apple pie and baseball are held up as the model of Americanism. I won't venture to guess what the Japanese equivalent of apple pie is, but I'm sure that baseball in Japan is as big a national sport as it is in America.

Even those who don't follow baseball probably have some baseball related memories stored away. Perhaps it's a sandlot baseball game, or being the last to be picked for the team. Perhaps it's an elementary school memory of listening to a world series game over the loudspeaker, or another audio memory of baseball cards clothespinned to the spokes of a bicycle wheel. City dweller or suburban dweller, I'm willing to bet that you have a few memories of your own.

The choice of haiku selected for Baseball Haiku recall memories similar to those mentioned above, and, many, many more.

American, Edward J. Reilly, captures the angst of not being picked:

the boy not chosen
steps over home plate,
picks up his books

Flash of lightning--
all the little leaguers
look up

Here's one from the Japanese poet, Kawahigashi Hekigoto, which describes a typical childhood experience:

while playing ball
it becomes time to go home
for supper

Haiku and baseball were made for each other: While haiku give us moments in which nature is linked to human nature, baseball is played in the midst of the natural elements--on a field under an open sky; and as haiku happen in a timeless now, so does baseball, for there is no clock ticking in a baseball game--the game's not over until the last out.

He does a spectacular job of explaining haiku and senryu to those who may not be familiar with the form. A little baseball haiku history is included, too.

Last month I attended a NH Fisher Cats game. The young woman who sang the National Anthem was a wrong choice in more ways than one...

butt crack--
no one hears the
national anthem

Here's a Poetry Friday challenge for you: dig up a baseball memory of your own and preserve it in a haiku or senryu. Then, visit Kelly Polark's blog for this week's Poetry Friday Round-Up.
Posted by Diane Mayr at 12:03 AM