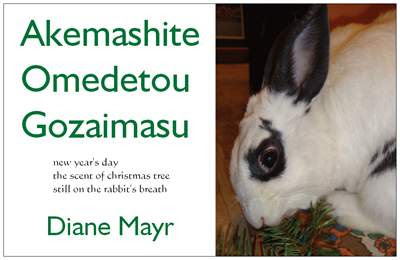 Akemishite Omedetou Gozaimasu is roughly equivalent to "Happy New Year" in Japanese. This is the second year I've participated in a nengajyou, that is, a New Year's card exchange, with haiku poets. Participants from all over the world send holiday greetings to fellow haiku enthusiasts. I sent the above card to the United States, Canada, and six other countries. (I could have sent to more, but I ran out of cards!)

I wrote about the nengajyou (I've also seen it spelled nengajo) last year, so, if you're interested in learning more, click here. Here's a blog posting from Kimono Reincarnate that has some samples of typical nengajyou cards.

2011 is the Year of the Rabbit. I have a grandbunny named Miles, who lives with my son and his wife. I took the photo of Miles in January in anticipation of participating in the nengajyo again this year.

In case you can't read it, here's the haiku that appears on the card:

Miles loves chewing on the Christmas tree, and it sure does give him piney-fresh breath!

2012 will be the Year of the Dragon. I don't have any dragons in my family, so I'll have to come up with something besides a photo for next year! (Don't suggest a dragon costume for one of my two cats--I could end up as cat food if I tried to put something on either one's head!)

Poetry, poetry, and more poetry should be one resolution on everyone's list for 2011. Head over to Carol's Corner to get a head start!

Celebrate responsibly! See you next year!
Posted by Diane Mayr at 12:01 AM