I'm participating in a Spark postcard exchange for July (click on the Spark label on the right to read of my past participation). I had to create four postcards to exchange with people in various locations. As it turns out, three of us are in New England and two are on the west coast.

Over the past month, I've been distracted (and distressed) by hearing of the separated immigrant families on our southern borders. It got me to thinking about the Statue of Liberty, and our nation's earlier responses to immigration. I decided to use the Statue of Liberty as my topic for the postcard exchange. (The selection of a topic is not a requirement of the exchange but is merely a way for me to corral my thoughts.)

I completed my four postcards and had a poem left over to use today. It is a bit political, so be forewarned.

In 1918,
18,000 servicemen
gathered to re-create
a harbor statue
in human flesh.
Liberty had to be sold
to those already free.

In 2018,
thousands of families
cross borders pursuing
a promise of liberty
in the flesh.
Liberty did not need
selling—she sold them out.

Here is the photo that inspired this particular poem: 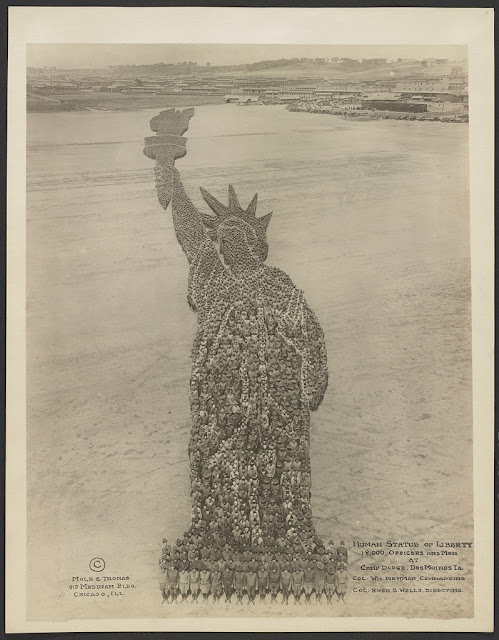 The photo was taken a century ago and had been planned for use in raising money to support the U. S. in its war effort. (It turns out not to have been used after all.) The arrangement had to have been well-thought-out and well-executed. It took 18,000 officers and men to complete.

We can't identify individuals, but we can almost guarantee there were no people of color in the shot. There were certainly no women! First generation immigrants? Who knows, but I doubt many.

Today, of course, a photo would include people of color, women, and immigrants. Sad to note, though, some members of the military who joined because they were offered a path to citizenship, have been discharged recently.

The four postcards I sent will be posted here on August 3. I want to give them time to arrive at their destination before making them viewable by Poetry Friday peeps.

Heidi is hosting the Poetry Friday Round-Up at My Juicy Little Universe. She's also going to tell us about The Poetry Foundation's Summer Poetry Teachers Institute she attended in Chicago!